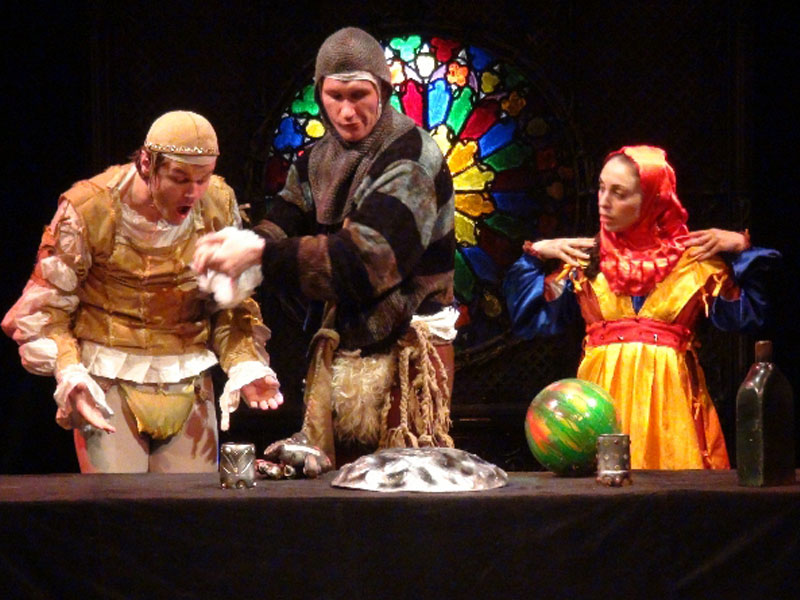 All, of course, know the expression "And now, back to our sheep", but perhaps not everyone knows that it became a proverb from the works of "Lawyer Pierre Pathelin" by an unknown French author, who worked in the fifteenth century and left us a wonderful example of a medieval farce.

So, we will return to our sheep, what is our story?

A bankrupt lawyer, tired of nagging wife, tucks case cheat not some simpleton, agile and prosperous merchant-clothier of Guillaume. Family Patalano manage to Dodge and bring the poor clothier's almost to madness. Here, luck!!! No need to pay for a lovely fabric that will put on the whole family, Yes even on the cap will stay. In this day Lawyer Patalano particularly lucky, so the customer is knocking at the door, and soon then the money jingling in the pockets of a new jacket. Who is the client? And that one shepherd is a simpleton, and must match the grazing sheep of the delay. And here they are all in Court!!! About the Court – a fair steward of the Law! Fair? For whom? For the Judges? Or for a Lawyer? Patlen full of triumphant victory — a trick he took the cloth, a trick he won the process. But it was not there: Patlen itself gets in their own network. The shepherd, instead of the promised double pay the fee, turns out to be a worthy disciple of the master of Patina and deftly inflates their teachers. The farce ends with the moral:

Oh, how that truth is Holy,

Your rogue is still smarter by half.

Metanoia – the play that turned the farce into a warning, a warning to a society mired in lies, about the inevitability of judgment, but really just and Higher,it is a call to rethink life and to repent.

Director - Oleksandr Klymenko (Director and theater actor, Director and screenwriter TC "Culture", graduate of the Perm choreographic school, the Tashkent art Institute, GITIS. Lunacharsky (now RATI). Member of the American Academy of cinema. On the question of the genre of the play the Director jokes: "It is a phantasmagoric view, the reconstruction of the medieval farce of the 15th century, using authentic music to the poems of vagantov. The show features acrobatics and dance. "Metanoia" — a changed mind, embodied in light-noise mystery".

Composer — Arthur Matinyan (graduate of two conservatories of Yerevan and Moscow, member of the Union of composers of Russia and Armenia, the author of symphonic, Opera, ballet, Church, chamber and piano works. In the heart of his work lie the rich harmonies of Eastern music, as well as the influences of the musical traditions of antiquity, middle ages, Renaissance, classicism, rock genre. Pupil Karen Khachaturian). Musical-noise design was created specifically for this project.